An electromagnet is a large inductor; it resists changes in the current through the coils. When the current is increased, such as when the magnet is turned on, energy from the circuit gets stored in the magnetic field. When it is turned off, the energy stored in the field is returned to the circuit and can cause large voltage spikes across the windings.

In alternating current electromagnets, the magnetic field is constantly changing. This causes high energy losses that are dissipated as heat. The losses stem from eddy currents and hysteresis losses in the core, and increase linearly with frequency. Coils are often cooled dynamically with water or air to avoid damage to the insulated wire coils.

The Lorentz forces increase with the square of the magnetic field. In large electromagnets the windings must be firmly clamped in place, to prevent motion on power-up and power-down from causing metal fatigue in the windings.

In SI units, the magnetic induction field is given in teslas (T). The tesla is equivalent to the magnetic flux (in webers) per unit area (in meters squared). In CGS, the unit is the gauss (G). One tesla equals 104 G.

Dipole magnets are used to create a homogeneous magnetic field between two poles. The core usually consists of high permeability steel with hundreds or thousands of windings around each one. The useful magnetic field is created in the air gap between the poles. The picture below shows a dipole magnet with an adjustable air gap by means of rotating pole nuts. 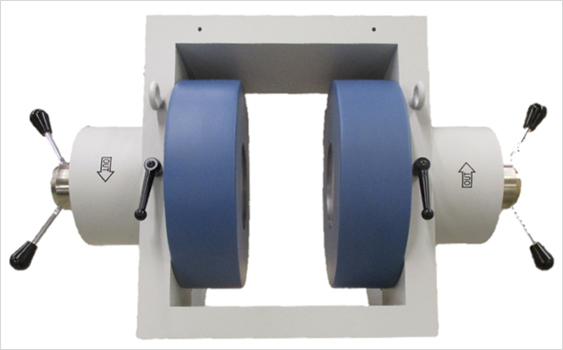